We all know that every car company has a unique logo or emblem as a trademark, but did you ever wonder about the stories behind it? Have you ever asked why does Audi’s logo seem like it was inspired by the Olympics? Or why does Chevrolet have a cross-like emblem similar to the symbol used in the medical field?

Here’s a list of short histories behind some of the most famous car emblems and logos: Alfa Romeo, initially known as Anonima Lombarda Fabbrica Automobili or A.L.F.A., got its symbolic logo from a draftsman named Romano Cattaneo in 1910. Cattaneo was inspired by the red cross in the Milan Flag and the coat of arms in the House of Visconti, which featured a biscione (an Italian term for grass snake) with a man in its jaws, representing the ability to face competition and stand against opponents. The words “Alfa” and “Milano” were separated by two Savoia dynasty knots.

The Romeo name was added when Nicola Romeo bought the company in 1916 to produce military hardware for the World War I. After the war, the company went back to manufacturing cars. 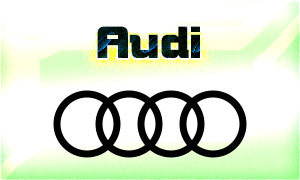 Audi was a conglomerate of multiple companies, and the four rings on its logo represent that. In 1899, a German engineer named August Horch founded an automobile firm A. Horch & Cie. After a decade, Horch was kicked out of his own company and decided to establish his own firm August Horch Automobilwerke GmbH. His former partners sued him for using the Horch name so he was forced to create a new name.

When he met with his business partner Franz Fikentscher and some other business friends, Franz’s son suggested the name “Audi,” which means “to listen” in Latin, as “Horch” means “hark” or “hear” in German. The idea was adopted, and so, Audiwerke GmbH was born.

In 1932, Horch, Audi, DKW and Wanderer merged to form the Auto Union. Its early logo shows the four original company names in four interlocking rings. Now, the company is known as simply Audi, with a simple logo of four rings. Contrary to popular belief, the BMW logo does not symbolize a white propeller on a blue sky. BMW, or Bayerische Motoren Werke AG/Bavarian Motor Works, has been a product of a merger between Karl Friedrich Rapp’s and Gustav Otto’s separate aircraft factories in 1913. It was later on when the company shifted into manufacturing automobiles.

The logo maintained Rapp’s original round logo, and the white and blue colors were an ode to the flag of Bavaria, Germany. Buick’s early logos featured different cursive variants of the word “Buick,” but in 1937, a real emblem emerged after the Scottish ancestral roots of founder David Dunbar Buick was discovered by a researcher. The logo looked like a Scottish coat of arms, with a gold cross, a large crest, and a deer head.

In 1959, the American car company adopted a tri-shield emblem to represent three models that made up the company lineup that time: LeSabre, Invicta, and Electra. The logo was changed again in 1975 into a hawk when Buick expected its Buick Skyhawk to mark the beginning of a new design era. However, the company stopped discontinued the line during the 80s and re-adopted its tri-shield logo. The Chevrolet’s “plus” emblem was also known as the Chevrolet bowtie logo, which origin is still unclear.

The logo was introduced by its co-founder, William C. Durant in 1913. According to official company publication, the logo was inspired by wallpaper in a French hotel he visited. In 1929, Margery, Durant’s daughter, stated in her book entitled My Father that Durant liked to doodle nameplate designs on the dinner table and the Chevrolet logo was created in between soups and fried chicken.

However, in a 1986 interview with Durant’s widow, Catherine, she said that she and her husband were in a holiday in Virginia during 1912 when Durant was reading a newspaper from the hotel and saw a design he liked, which he said that was a good emblem for the Chevrolet. This information triggered historian Ken Kauffman to research, and in 2011, he eventually discovered that the newspaper Catherine was probably referring to was the Atlanta Constitution. An edition featured an advertisement for “Coalettes”, a refined fuel product for fires, wherein the logo had a slanted bowtie similar to the current Chevrolet icon. The newspaper was dated just nine days after the incorporation of Chevrolet Motor Co.

Another theory explaining the logo was that the bowtie was a representation of the Swiss flag since co-founder Louis Chevrolet was born in Switzerland. Ferrari’s logo is famous because of the prancing horse, but the use of it was not originally made by founder Enzo Ferrari. The horse was painted on a fuselage of a World War I fighter plane by a heroic, Italian fight pilot, Count Enrico Barraca. Barraca’s mother, Countess Paulina, asked Ferrari to paint her son’s prancing horse to his cars for good luck. The reason behind the Italian luxury carmaker’s bull emblem is pretty straightforward. Founder Ferruccio Lamborghini was a bullfighting enthusiast, and in 1962, he visited the ranch of Don Eduardo Miura where Spanish fighting bulls were being bred during the conception of the company. His zodiac sign is also symbolized by a bull, being a Taurus, and his impression with the Miura animals made him adopt the raging bull as a logo for his company. Throughout Mazda’s history, the emblems of this Japanese car giant have been mostly symbolic. In 1936, Mazda’s logo resembled three mountains (referring to Hiroshima) and also looked like three letter M’s (which stands for Mazda Motor Manufacturer), with long extensions representing wings for speed and agility.

In 1991 and 1992, the company adopted the “cyclone” and the “eternal flame” logo that represents the sun and a circle of light that stands for heartfelt passion. The present-day logo, which was used since 1997, features a stylized “M” that represents wings that stretch out to the future. Behind the German manufacturer’s logo is a statement of bold ambitions. The Daimler-Motoren-Gesellschaft, which was eventually renamed as Mercedes Benz after a 1926 merger, adopted a three-pointed star logo. Its use can be traced back to 1870s when co-founder Gottlieb Daimler sent his wife a postcard with the star on it, with a note that it would one day shine over their own factors. The three-pointed star indicates triumph for dominating three places: land, sea, and air. Japanese carmaker Mitsubishi has a logo influenced by family ties. Founder Yataro Iwasaki chose the three-diamond mark as an emblem to represent the combination of the Iwasaki family crest, which is three-stacked rhombuses, and the three-leaf crest of the Tosa clan, Yataro’s first employer.

The company’s name itself is a combination of the words “mitsu” (three) and “hishi” (water chestnut, used in Japan to refer to diamond shape or rhombus) – thus meaning “three diamonds.” Peugeot brothers Jules and Emile had turned their father’s French grain mill into a steel mill to produce tools, steel, irons, umbrellas, sewing machines, kitchen gadgets, bicycles and by the 1890s, automobiles. The lion logo was designed by jeweler and engraver Justin Blazer in 1847, as a trademark for all products from Peugeot. However, it was only in 1906 when the company adapted the logo in their production cars.

The lion symbolizes the quality and the fierceness of the company in terms of facing competition. Subaru’s six-star logo represents the five companies that merged to form Fuji Heavy Industries, which is Subaru’s parent company. In Japanese, “Subaru” is the name of the Pleiades star cluster that also means “to gather together.” The idea was from the company’s first president who cherished the word Subaru.