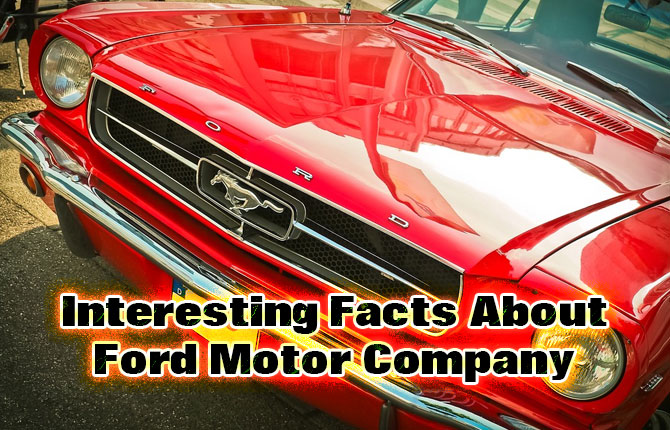 From the very beginning, there have been many inventions that revolutionized this world in a better way, but the automobile invention is the most important. It is the first US automobile maker, and now one of the biggest in the world. When we talk about automobiles, Ford Motor Company has the history of leaving a mark on the auto industry. Here are some of the most interesting and surprising facts about the Ford Motor Company: Henry Ford, the owner of Ford company and Thomas Edison were two iconic inventors, and their friendship was, even more, stronger than the things they made. Many of us have never heard the delightful story of their lifelong friendship. There are a lot of examples in their lives that no one can deny to call it friendship goals. One of their friendship stories goes like this: Ford asked for a somewhat weird request — to have Edison’s “last breath.” Edison’s son managed to catch his father’s final breath in a test tube and closed it off with a cork. Ford kept the tube as a remembrance. The Only Car That Jim Morrison, A Legendary Doors Singer, Ever Owned Was A 1967 Shelby GT 500

Jim Morrison owned one car only for his entire life, and it was none other than a Ford vehicle. The legendary Doors front man’s GT 500 was of mist blue color and was a gift to him from his record company. However, Morrison lost it somewhere before he left for Paris, where he eventually died in 1971 due to a heart attack at the age of 27. Whereabouts of his car still remains a mystery. The First Ever Monster Truck Was A Ford

An ex-construction worker and inventor in St. Louis, Missouri, named Bob Chandler used his family’s 1974 Ford F-250 pickup truck as a base for his Bigfoot vehicle in 1975. Usually, pickup trucks are purchased as a family vehicle so whatever model of truck that a family likes, they tend to show loyalty and affection for that truck and keep it for years. For this basis, Ford pickup trucks have been the bestselling vehicle in the United States.

Ford’s Signature Blue, Oval Logo Was Introduced 4 Years After the Company Was Already in Production

After trying other logos that didn’t make quite an impression with the public, Ford introduced the simple blue oval logo in 1907, four years after the company was established. Childe Harold Wills, first chief engineer of the company created this logo. He designed business cards using his own calligraphy to stylize the letters. The logo became iconic since then. The Ford F-series, a series of light to medium duty trucks, has been manufactured and marketed by the company since the late 1940s. The Ford F-150 has been the best-selling vehicle in the US since 1981. As of June 2013, there have been over 33 million units sold in twelve F-series generations. For forty consecutive years, f-series remained the best-selling truck. Since the company launched f-series, it has sold 818,580 of the trucks in these years. Over the years, trucks got very popular for commuting to office jobs, family trips and shuttling the kids to school. Ford Is the Second Biggest Family Owned Company in The World

Ford Motor Company, the most prominent family businesses ever, began its history from the legendary founder, Henry Ford whose hard work and devotion lead to the creation of the first affordable and great car. Henry Ford’s great-grandson William Clay Ford Jr. is currently Ford’s executive chairman. He also became the company’s CEO in 2001. The two other members of the Ford family also sit on the board. Ford Was the First Ever Green Company

People nowadays are so aware of pollution and its destructive effects, but Henry Ford was aware of it already, a long time ago. He used biofuel to run the vehicles at the time when hardly a few people knew what a biofuel was. Ford’s American and British production plants used human excrement and animal manure as a fuel to power their factories. They continued doing this so until 1939. It’s so unfortunate that while other companies were copying his designs for automobile, no one picked up this idea of using animal manure as fuel. You can imagine how shocked Chevy might have been when they saw this picture of the construction workers using a Ford Super Duty while setting up their own exhibition booth. Probably Chevy didn’t bother to ask the contractor what kind of trucks they used. A huge PR boo-boo for Chevy! The “Ford A” was the first car the Ford Company produced in 1903. The automobile company had invested heavily in this production, leaving them with only $223.65 in its bank account. Fortunately, those cars became a commercial success and generated enormous profits for Henry Ford and his company. On the “Ford A” again, the first owner of this model was Ernst Pfennig, a dentist from Chicago. He purchased this car on July 23, 1903. The Model T by Ford Was the Most Popular Model

Ford’s first series, the Model A, was a success. However, it was the Model T that became a smash hit among customers, thanks to Henry Ford’s business savvy.

Being aware of the competition, Ford knew that he had to offer something to lure customers, so the Model T units were priced about half of the price of his rivals’ cars.

Henry Ford Wasn’t Actually an Inventor; He Was A Revolutionary

If you have always thought that Henry Ford invented the first car, then the fact is, he didn’t. Many historians believe that Henry was inspired by Karl Benz who created a vehicle known as Motorwagen in 1886, the first gas-powered vehicle in Germany. So, this was the ripple that started the wave to Ford motor invention. Ford made the revolutions in factories to create an affordable vehicle for everyday use by the families.

Read more about it here.

The Secret Behind the Great Success of Ford Motor Company

A great move was taken by Henry Ford that increased the productivity of his factory. He raised the pay to $5 per day for his employees. This step of Ford brought great things to the company; workers started working really hard which led to increased productivity, and also it became easy for them to buy a car that they had a hand in making. So, this was a win-win situation for both the employees and the company.

This also shows how wise Henry Ford really was – undoubtedly, everything he did for the company resulted in the betterment of the society as well.

The company wasn’t always making so much money; there were bad days in the history of Ford Motor Company as well. When the company was about run out of cash in 2008, Alan Mulally put together a bold plan to help the company in getting back to its strong position. He took several risks, but he knew it was the only way to survive – and indeed, it was one of the best comebacks in business history. Read this fantastic book “American Icon: Alan Mulally and the Fight to Save Ford Motor Company” by Bryce G. Hoffman to know about the intelligent decisions that Mr. Alan made to save his company from going bankrupt.