General Motors, the most successful and one of the biggest car manufacturer company of the United States, commonly abbreviated as GM has a long history that begins in 1908 and is still in process. This company also designs and distributes vehicle parts and sells financial service. There is no American who doesn’t know about this brand as it is quite popular in the entire USA. Currently, GM produces vehicles in more than 37 countries across the globe.

Here are some fascinating and interesting facts about General Motors that you might not be familiar with:

Logo of GM: Mark of Excellence

General Motors Corporation pens the mark of excellence in 1964. The logo initially included the phrase at the bottom and as a decal. It was fixed on the doorjambs of General Motors’ vehicles beginning in 1966. It was also stamped on the release buttons of seat belt buckles, ignition and door keys until 2002. Turquoise color was changed to a royal blue. In 2009, GM stopped using this logo on their vehicles because the quality of cars began to deteriorate. Also, some surveys indicated that customers were more positive towards the specific core brands rather than the GM corporate brand. General Motors named Mary Barra as CEO in January 2014. This made Barra the first woman to be appointed in charge of a major car maker. Barra is a graduate of electrical engineering at Kettering University, formerly known as General Motors Institute. She ranks #1 on the list of Women CEOs of the Fortune 500. General Motors Was Founded In 1908 By William C. Durant

Durant (1861-1947) was a carriage maker who used to run his own company, Durant-Dort Carriage Co. His company was the biggest carriage maker in the world at the time when he finally decided to create General Motors. For that, he only had $2,000 in the capital. He actually wanted to take control of Buick (a small car company). GM was responsible for creating the Lunar Roving Vehicle, aka the Moon Buggy, which was successfully used during the Apollo 15 mission. Being the pioneer automobile maker in the world, it is not at all surprising that General Motors came up with the most important firsts. These include the first air conditioning system, the first fully automatic transmission, the first to install turn signals (they are now one of the standard parts of the car), and the first mechanical heart pump. Plus, they were the first car maker to reach $1 billion in sales, in 1955. Buick was a small car company that was about to go bankrupt. However, Durant eventually realized the cars’ potential as a big money-maker. He saw an opportunity for new business by making safety improvements on the then-novel mode of transportation. General Motors was then Buick’s holding company. However, Durant made a decision to branch out on his own, which turned out to be a wise one. Within the next two years, he came to have many other car companies such as Cadillac and Oldsmobile. Durant attempted to buy out rival carmaker Ford in 1907. But the bid didn’t turn out well, as Henry Ford still stood firm on being paid in cash. Another first from Ford is the “hybrid” car, a car that runs on a traditional gasoline motor and an electric motor. GM was interested in contributing to green energy; that’s why it was working on a hydrogen cell hybrid car. In 2004, GM manufactured its first full-sized hybrid electric pickups that operated on a hydrogen fuel cell. But the board of directors rejected this project outright and maybe the big oil companies too, who didn’t want (and still don’t) any gas-less vehicles as they would hurt their sales. 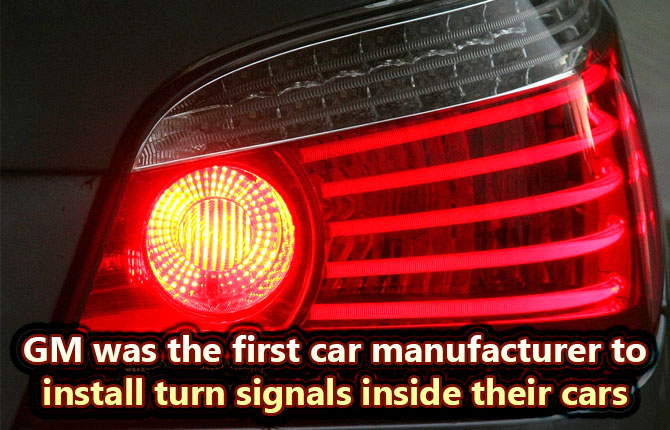 In 1939, Buick (now the upscale car brand division of General Motors) was the first one to introduce the world’s first-ever turn signals. They were activated by the driver let or warn the other drivers or pedestrians that the vehicle was about to make a turn. Unlike what the rival car makers have claimed, the undisputed fact is that GM was the first to invent electric fuel invention, in 1979. GM also developed the anti-lock braking system in 1972, the world’s first. This feature keeps the wheels from locking up while breaking.

General Motors is well known for taking over or owning different car brands. They have bought and sold many car companies over the years, and this list of companies under GM is ever-changing. Some of the car brands under their umbrella are Buick, Chevrolet, Wuling, GMC, Cadillac, and Holden.

During the 1950s, GM diversified their projects and presented the concept of two trains. This train was put to good use; one part transported passengers while the other went to Disneyland and was called Viewliner. The train was used throughout the 1950s.

The biggest market for sales proficiency is China. The sales market tells a very different story for the United States, where sales have taken a nosedive. In China, General Motors has become the best-selling foreign automaker. For the Chinese market, General Motors manufactures three brands of cars which are only available in China. These brands include Baojun, Jiefang, and Wuling.

While most automotive companies focus on making money, General Motors does both: Making and Giving. They support many charities; in fact, they have donated millions of dollars to charity. Being supporters of eco-friendly products, GM has known for supporting the nature conservancy. Since 1944 till today, they have donated over $23 million in cash and vehicles to this charity. Not just this, they are also known for involving in raising awareness about breast cancer.

There is a reason why this artificial heart looked like a 12-hp engine – it was developed by a car company, General Motors in 1952. It made possible the world’s first open heart surgery. The great thing is that GM donated it at no cost to the surgery team of the Wayne State University of Detroit.

GM Did A Lot for WWII

Due to World War II, GM stopped all its other productions and started working on developing items like airplanes, tanks, marine diesel engines, shells, machine guns, and trucks etc. These items worth more than $12 billion. GM was the only company that delivered such material in bulk and dedicated all its production to the Allied War effort. William C. Durant put many things at stakes to take his company, General Motors, to the level that no one could reach. He started piece after piece, buying all the companies that he thought would benefit him. If you are interested in reading more about his efforts in making General Motors, this book “Deal Maker: How William C. Durant Made General Motors” by Axel Madsen packs lots of solid information about America’s most significant automotive company.