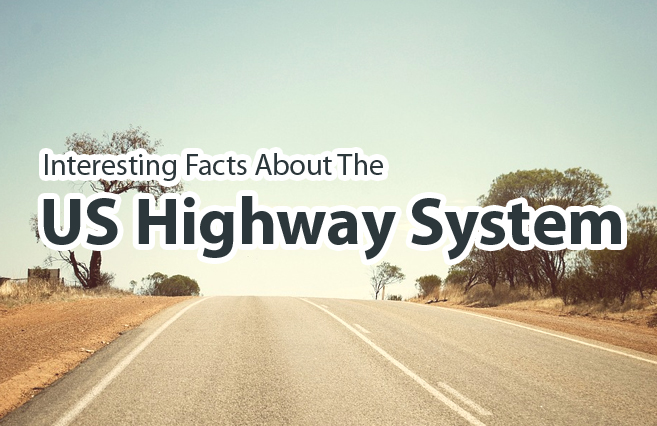 President Dwight D. Eisenhower passed the Federal-Aid Highway Act of 1956 which paved the way (pardon the pun) for the earliest interstate system in the US. The country now has 46,876 miles of roads that run across the country (even Alaska and Hawaii). Check out some other mind-blowing facts about the US highway system: The numbering systems used for interstates are actually different from the number system used for highways. For instance, Interstate 10 (I-10) runs through the southern states, while Highway 10 runs through northern states. This way, motorists never get confused about whether to take I-10 or Highway 10. The Federal Highway Act of 1944 actually gave the development of the 40,000-mile National System of International Highways the go-signal, but there were still issues about funding. It wasn’t until the Federal-Aid Highway Act of 1956 that funding was finally earmarked for its construction. No Design Rules Dictate the Shape of Roads

It has been told that one out of every five miles should be straight so that it can also be a runway for planes. While this has happened, there are otherwise no rules that dictate such design. Including the potholes! The pothole on I-75 near Detroit, Michigan is called by many as the nation’s biggest pothole, which is responsible for destroying about 25 tires. However, the bridge drew flak because it was too small, so this led to the construction of a newer, bigger and taller bridge. The old bridge was demolished. One of the reasons for having interstate and highway systems is to enable evacuation of major cities, in the event of a disaster such as a nuclear attack. The Red, White, And Blue Shields Used to Distinguish Interstate Numbers Are Trademarked by The American Association of State Highway System

Texas traffic engineer Richard Oliver made the original design of the shield. His creation was picked out of 100 entries in a nationwide design contest in 1957. It was a clause in the emergency highway energy conservation act signed into law by Richardson Nixon said that if a state did not set its highway speed to 55mph, that state would lose its federal highway funding. Nowadays, every state in the US (as well as its territories) sets its own speed limits. Most Americans Thought that the Interstate Highway Act Was A Good Idea. But When Construction Started, People Started to Revolt

However, as the construction began, communities were either displaced or broke off. This led some groups of people to start protesting against it, and activists halted the construction in many of the states’ highways.

“Interstate Highway” is an abbreviation of the official name

The official name of this highway system is known as “Dwight D. Eisenhower National System of Interstate and Defense Highways”. This was named after the president Dwight Eisenhower who championed the highway system and signed the FAHA (Federal-Aid Highway Act) of 1956 into law. This idea came into his mind from his time in Germany as General in the US Army during World War II.

To make the interstate system more effective, over 55,000 bridges were built in 2004.

The shortest interstate route segment that runs only 0.11 miles is I-95 in the district of Columbia.

The longest interstate route that runs over 3,020 miles is I-90 that connects Seattle, Washington to Boston, Massachusetts.

Funding for A Bridge Over the Tombigbee River

To construct the bridge over the Tombigbee River, the State of Alabama held a rooster auction. Even President Woodrow Wilson’s rooster was also up for sale. Hellen Keller also participated in this auction by sending a rooster to the auction that was sold for $5,000. However, no one knows the exact amount that was made by selling the birds in the sale because the records were not kept very well back then. But still, the State Department somehow managed to construct a 998 feet long bridge with the help of a construction firm out of New Orleans.

Interstates Vs Other Roads

A McDonald’s is Built Over the Top of An Interstate

Just imagine eating your McBurger while seeing all the highway traffic passing beneath you? A McDonald’s restaurant is built on the top of I-44 in Vinita, Ok. It passes over the interstate, and you can enjoy your meal by watching the vehicles traveling in high speeds.

State Capitals That Are Not Directly Entertained by The Interstate Systems

Dover, De; Carson City, NV; Pierre, SD; Juneau, AK; and Jefferson City, MO are the state capitals that are not directly served by the interstate systems. Want to know what makes modern America what it is now? This excellent book “Divided Highways” by Tom Lewis packs the history of Eisenhower’s Interstate System and how asphalt and concrete drastically changed the United States. America’s Interstate System is the world’s longest and largest engineered structure, and every American should know about it in detail.