Any device or material placed on the road to relay guidelines is known as pavement markings. They are usually painted on the road with road-marking machines and can also be used to identify parking spots or designated zones for different purposes in other facilities.

The pavement markings are also used on paved roads to give guidance to pedestrians with direction and information. The consistency of markings plays a vital role in reducing misunderstanding and presenting an accurate description of the zone. However, some countries and regions classify and define pavement markings in different ways.

For example, mechanical, non-mechanical, and temporary white lines are used to describe white stripes. On the road, they can be used to restrict traffic lanes, warn drivers and pedestrians, or they might be painted on the edges of a road to alert a sleeping driver. The pavement markings can also indicate parking and halting rules.

The marking system is constantly improving, with technical advancements like retro-reflectivity, increased lifespan, and cost-effective installations. Nowadays, road surface markings are even more effective in relaying different types of information to drivers, including navigational and safety.

Road surface markings significantly influence driving behavior because they are placed in the driver’s center field of view and mark the road’s contours.

Studies have proved that the impact of road markings on the driver’s behavior in keeping the vehicle’s lateral position inside the lane and adjusting the driving speed in various road traffic situations. Out of 36 studies, 19 of them were done with the help of a driving simulator.

Types of Pavement Markings and Their Meanings

There are several types of pavement markings, but white and yellow are more frequently used, and you should fully understand them before you give your written DMV test and permit practice. Traffic moves in opposite directions on the road with yellow lines in the center. Since you are on a two-way street, you must drive to the right of these lines. For example, you’re going on a divided highway or one-way road if a solid yellow line is painted on the left edge. The yellow line is frequently used for denoting the boundary of the middle or division.

Usually, one is on either side of the divider; the road’s right edge is indicated with a standard white solid line. You should remember that if the yellow line is on your right and the white on your left, you are on the wrong way. So always keep the yellow center line to your left.

In addition, there are also:

On a two-way route, the yellow center markings can include:

A standard broken yellow line indicates a two-way passing zone. Therefore, be careful when driving in either direction. And make sure that the road ahead is clear.

One Solid and One Broken Yellow Line

The two regular yellow lines indicate that traffic from either direction is not allowed to pass. If you are traveling on an undivided two-way roadway with four or more lanes, you will see its center marked with a solid double yellow line. Don’t try to drive to the left of the center unless you have to cross the lines to turn left.

The solid yellow lines indicate a no-passing zone, meaning that you cannot cross these lines to pass other cars. However, the slow-moving bicycles or other obstacles in your travel lane are exempted in some states. In Florida, for example, you can cross the lines if there is an impediment that requires you to travel left of the roadway’s center.

A car may cross the center line in a no-passing zone if the route is clear, and it is safe to do so when a bicycle is moving so slowly that he or she becomes an impediment. Also:

You can cross solid yellow lines in a no-passing zone to turn left onto a driveway or sideroad. Unless specified explicitly by state legislation, you may also be allowed to do a U-turn crossing a single or double yellow line. You should ensure that you are familiar with the laws in your state.

These lanes cannot be used as a regular travel lane or for passing other vehicles. You should only use this lane when you are about to make a left turn. Most drivers often misunderstand the painted arrows on the pavement, believing that the lane is for both left and right turns, but that is not the case.

A reversible lane’s pavement markings consist of a typical broken double yellow line on either side of the lane.

Make sure not to cross the yellow lines to enter a reversible lane until lane-use control signals indicate that the lane can be used to drive in your direction or to take a left turn. 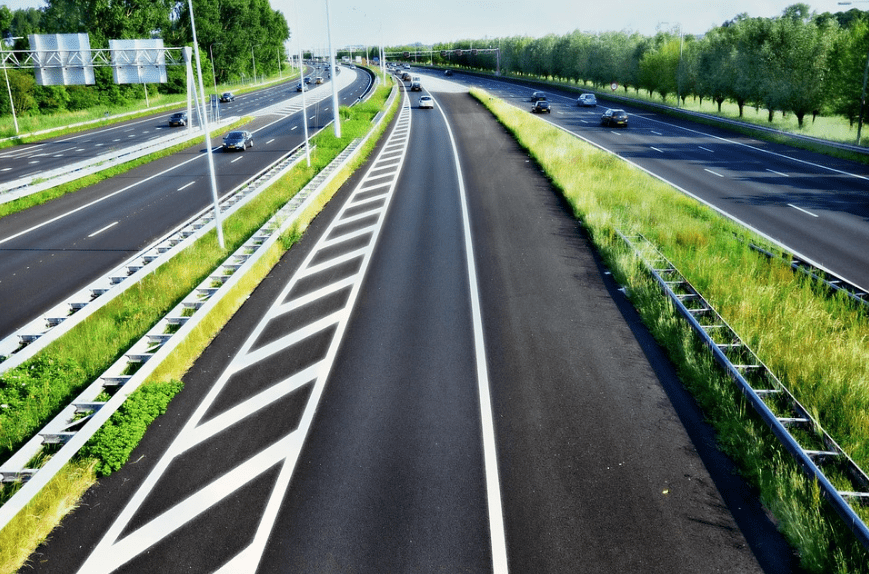 The white lines separate the traffic lanes that are only traveling in one direction. These pavement markings can include:

A standard broken white line separates the lanes where you are legally allowed to change lanes. Cross the lane markings with caution.

You should stay in your lane when you see regular or broad, solid white lines drawn between travel lanes. The solid line indicates that crossing the line marking is not allowed. That is why you should only change the lanes if necessary to prevent an accident.

Solid white lane line-markings are frequently used to distinguish a go-through-line lane from an additional obligatory turn lane at crossings. Don’t alter your mind at the last minute once you have entered your route; follow the pavement markings.

1. The Line-Markings Help In Regulating Traffic

Line markings are incredibly useful in setting safe driving guidelines and conditions as long as drivers follow the regulations of the road. Line markings on the road typically define specific driving maneuvers authorized in particular locations or even particular lengths of a road.

All of these road rules must be marked so that drivers can be aware of them and follow them to the best of their abilities. These lines can include yellow lines that separate traffic traveling in opposite directions, broken white lines that show areas where drivers are allowed to switch lanes, and arrows on the pavement show whether they can turn right or left, are examples of these.

Nighttime visibility and driving issues are a major problem for many drivers, leading to unsafe driving situations. The solution to this problem is to place the reflective pavement line markings on as many roads as possible so that it becomes easier for drivers to see when driving on dark streets at night.

This procedure is also quite effective in terrible driving circumstances produced by heavy fog or rain. It is beneficial for truck drivers who work midnight shifts and go on several side or dirt roads. Reflective road markings can help drivers distinguish between lanes and enhance overall visibility under challenging driving situations.

3. Increases the Safety of Pedestrians and Drivers

As a consequence of the increased visibility, correctly defined line markings can improve the overall safety of pedestrians and other people on the road. But, again, this is based on the premise that all parties must obey the laws of the road, which implies that pedestrians are also partially responsible for their road safety. Therefore, they should utilize authorized crosswalks when crossing to the other side. This will guarantee that approaching cars can easily notice them.

To prevent any possible confusion or misconceptions regarding where non-disabled and disabled persons are allowed to park on your property, you should clearly distinguish between these types of parking spots and ensure that they are designated at all times.

Line markers alone are not sufficient to determine disabled or even family parking in this situation since they can fade significantly over time, making it impossible for the vehicles to notice the difference.

Some Points to Remember for Road Safety

Pavement markings or road surface markings are essential for keeping traffic in check. Various markings represent various things and methods of controlling cars and their designated zones. Therefore, make sure to learn about traffic rules and pavement markings to fully understand the layout of the road and how to go about crossing lanes and drive correctly.