When it comes to determining when was the first automobile invented and by whom, the success and invention cannot be attributed to a single individual. Progress and developments were made from time to time until some important personalities such as Karl Benz stepped into the game and change the course of history. At the same time, Leonardo da Vinci is credited with the idea of a self-propelled vehicle in the 15th century. To understand how did the first automobile came about, we will have to re-visit history and recall some important and significant events related to automobiles.

History of the Automobile

Although progress almost came to a stop in the mid-19th century due to a backlash against large vehicles but work and progress continued on some internal combustion engines. With time, the engine evolved and the engineers ended up creating two and four-cycle combustion engines while using gasoline as fuel.

It was then Karl Benz who perhaps took the biggest step and helped roll out production vehicles in 1887. He did it by developing petrol or gasoline-powered automobile and made several identical copies as well. Followed Karl Benz, Ford stepped into the spotlight and began its automobile production in the Ford Motor Company in 1908. The automobile produced in the factory became the first automobile to be produced on a moving assembly line. What history tells us is that perhaps the first steam-powered vehicle was built by Ferdinand Verbiest around 1672 as a toy for the Kangxi Emperor. At the time, it was a small vehicle that was not able to carry a human but was possibly the first working steam-powered vehicle. It was in the late 18th century when large steam-powered self-propelled vehicles came around and were large enough to carry and transport people.

It was Nicolas Joseph Cugnot who displayed and introduced his experiment that involved a steam-driven artillery tractor in 1770 and 1771. Unfortunately, Cugnot’s design was not deemed practical and was not allowed to be developed in his native France. As a result, Great Britain took hold of the center of innovation and by 1784, William Murdoch had invented and built a working model of a steam carriage.

After a few years, in 1801, Richard Trevithick was driving and running a full-sized vehicle on the roads in Camborne. However, the first automobile patent was granted to Oliver Evans in the United States on May 3, 1789.

The 19th century saw significant progress in the field of automobiles. Attempts were made to develop and introduce practical steam-powered vehicles along with features such as hand brakes, multi-speed transmissions, and better steering. Commercially successful vehicles were used by mass transit but had to be banned for a while due to a backlash that resulted in the passage of legislation such as the United Kingdom Locomotive Act that required such vehicles on road to be preceded by a man on foot waving a red flag and blowing a horn.

This halted the development of the auto road industry in the UK for most of the 19-century. However, the investors shifted their attention and efforts to offering improvements in railway locomotives. It wasn’t until 1896 when the law was repealed.  It was in 1816 that a professor named Josef Bozek built an oil-fired steam car. On the other hand, Walter Hancock who built and operated steam buses at the time introduced a 2-seated car called phaeton in 1838.

Then in 1867, Henry Seth Taylor who was a Canadian jeweler demonstrated his 4-wheeled “steam buggy” and again the following year. Furthermore, Frenchman A medee Bollee in 1873 produced one of the first “real” automobiles that were powered by a self-propelled steam engine designed to transport a group of passengers. 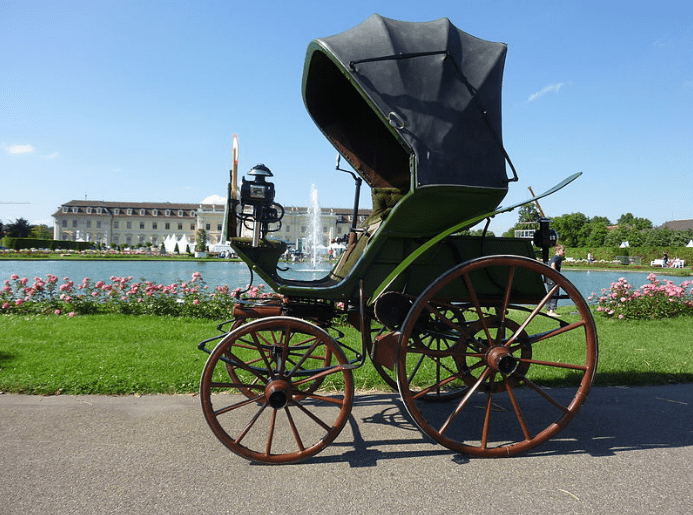 At the beginning of the 20th century, around 22 percent of vehicles were powered by gasoline, 38 percent by electricity, and 40 percent by steam. However, all these automobiles were American. Although the gasoline and steam engine vehicles had made significant progress by then but there were a lot of complaints and drawbacks that made people shift to electric vehicles.

Gasoline engines at the time were known for their unreliability, whereas the steam engines were complicated. Therefore, the electric-powered vehicles offered the best of both worlds by offering silent operation and close to zero maintenance. The first electric vehicle to cross 100 km was introduced and developed by Camille Jenatzy.

Following the success of the vehicle, the invention of the storage battery also came around when Gaston Plante in 1859-1860 had become determined to play a significant role at a time when electric-powered vehicles were on the rise. Then, Camille Faure in 1881 made some improvements and as a result, made the electric vehicle possible.

As a result, Fure’s tricycle was the first electric vehicle that ran in Paris in 1881. Following it were three other wheelers in London and Boston. On the other hand, the first American battery-powered automobile was built in Des Moines and could even maintain a speed of 14 miles per hour.

However, further development in the electric automobile sector was temporarily halted due to a lack of charging infrastructure. Prior to 1910, there were very few homes even in cities that were wired with electricity. Therefore, the battery exchange schemes and community charging stations could not keep up.

While newer electrical vehicles and charging solutions were making their way into the market, there were some problems that needed attention as well. Electric vehicles could only be driven at a low speed that made them only limited for urban use. Secondly, they required quite a bit of time to recharge. As a result, the electric automobile game had ended by 1920, even though a few manufacturers were still offering them until World War II.

As a blessing in disguise, the war gave rise to experiments with small electric vehicles that saw extensive use in Britain for milk delivery. The use continued in urban areas for the rest of the century.

Gasoline, steam, and electric-powered vehicles even though had made significant progress but could not be driven fast. At the time, even a horse could run faster than vehicles and this was accepted as a challenge by important automobile personalities such as Karl Benz from Germany. Karl Benz was adamant on the fact that the internal combustion engine could surely supersede the horse and revolutionize the world’s transportation.

Although he had many obstacles to overcome but he was determined to build a gasoline-fueled vehicle that was capable enough to change the course of automobile history. Even though he had the vision and determination, he was short in investment, facing extreme poverty, and was not supported by his associates even. They were off the view that Benz was an unbalanced individual when it came to developing a gasoline-fueled engine.

Soon, Benz ran his first car, which was a three-wheeler powered by a two-cycle one-cylinder engine in 1885 on a happy and triumphant day. He circled a cinder track beside his small factory while his factory men and wife ran along the vehicle clapping her hands. The vehicle made four circuits around the track while only stalling twice before a broken chain brought it to a stop. Even the, most people around and close to Karl Benz stated that they were mildly impressed and that there was no future in such vehicles.

Benz made his first sale to a Parisian named Emile Roger in 1888. His vehicles were top-quality and the design was impressive too, all this combined bore weight and enable him to make further more sales. Overall, the vehicles sold quite well and by then, Benz had employed around 50 workers who built the tricycle car and in 1893, he began making a four-wheeler.

Even though Daimler steered clear of Engineering schools during his educational career but certain events made him end up with various mechanical and engineering concerns. In 1872, he became the technical director of Otto’s firm. He began building stationary gasoline engines and the next decade was spent doing important work on the four-stroke engine.

Daimler brought in several brilliant minds including Wilhelm Maybach but both Daimler and Maybach resigned in 1882 stating that Otto did not understand the potential of the internal combustion engine. As a result, they set up a shop in Bad Cannstatt and build an air-cooled, one-cylinder engine. The engine as compared to Benz’s engine could run at 900 revolutions per minute. Then, both Daimler and Maybach built a second engine that was mounted on a wooden bicycle.

It first ran on November 10, 1885. The following year, the first four-wheeled vehicle by Daimler was made. It was basically a vehicle that was essentially a carriage modified to be driven by a one-cylinder engine. Benz at the time thought that a motorcar was a separate category. The Daimler and Benz firms came together and merged in 1926. The products since then have been sold under the name Mercedes-Benz. Although Daimler merged with Chrysler as well in 1998 but the practice of using the name Mercedes-Benz still continues.

Both gasoline and electric vehicles today have come a long way since the first steam, gasoline, and electric powered vehicle was introduced. Today, there are a lot of electric-powered vehicles out there that can easily overtake and have overtaken some prominent gasoline-powered vehicles. Not to mention that the internal combustion engines are as fuel-efficient and reliable as they have ever been. Then, there are hybrid vehicles as well that offer the best of both worlds.

When it comes to gasoline-powered vehicles, one can consider Ferrari, Toyota, and BMW that are known to produce some of the finest engines in the world. However, when it comes to electric-powered vehicles, Tesla takes the top spot. More so, Toyota had also introduced its Hydrogen powered vehicle but it will be time until the trend catches on. The availability of charging ports in many countries is still a problem and that is why electric cars are finding it a bit difficult to make their way into some of the most potential markets.

Considering the development and progress in the world of automobiles, one can say that the future is bright. With every manufacturer trying to introduce new features and technology each year, cars are only destined to become better. However, this would not have been possible if it wasn’t for the dedication and commitment of individuals like Karl Benz and Gottlieb Daimler who saw the immense potential in the internal combustion engine.