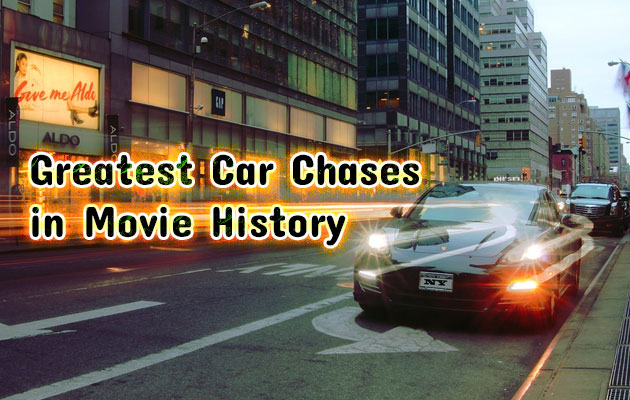 Most people today have watched and enjoyed the thrill of movie car chases from the Fast and Furious franchise. The brilliant effects and breathtaking stunts successfully got fans hooked, making it Universal Picture’s biggest franchise of all time. It took the car chase to the next level, but these action films of the previous decades were the splendid pioneers of the high-speed chase mania. This isn’t the Nicolas Cage/Angelina Jolie’s 2000 film – that was just a remake. The original version by H.B. “Toby” Halicki, a.k.a. the Car Crash King, was an independent classic that was famous for its 40-minute car-crashing chase scene, with 93 cars wrecked in the process in an exciting police pursuit sequence. There was also a spectacular 30-feet jump performed by a ’73 Ford Mustang before a car crash.

This movie earned Halicki a cult following, which encouraged him to make two more crash car films. Tragically, Halicki died in 1989 while filming the sequel for Gone in 60 Seconds due to a stunt gone wrong. It seemed to be that the title was a sadly perfect description of his life’s ending. Bullitt’s car chase scene is regarded as one of the most influential in movie history. “The King of Cool” Steve McQueen starred as police lieutenant Frank Bullitt, a tough-talking officer who would rather sacrifice a limb than suffer a fool. The genre-defining film was set in the narrow, hilly streets of San Francisco, which sees Bullitt in his 1968 Ford Mustang, constantly in pursuit of criminals.

The 10-minute chase was the highlight of the film, with a first-person viewpoint causing the audience to flinch every time Bullitt takes a corner too sharply. The scene ended when the hitmen lost control and crashed into a gas station with a fiery explosion. A well-remembered, chaotic car stunt and chase sequence made this action thriller as one of William Friedkin’s most memorable films. Two undercover cops Richard Chance (William Petersen) and John Vukovich (John Pankow) were chased by gangsters when Chance drove his Chevrolet up a freeway exit ramp directly into multiple lanes of the oncoming traffic at top speed. The astonishing precision of cars and gunshots coming out of nowhere to attach their car was a thrilling scene to watch.

Legend has it that Friedkin came up with the idea of staging a car chase against the flow of traffic when he dozed off the wheel while driving home from a wedding, and woke up to find himself in the wrong lane. For the next 20 years, he wondered how he could get that experience into a film, and he did it with To Live and Die in L.A. John Frankenheimer took his love for fast cars on the big screen by creating this spy action-thriller starring Robert De Niro. This film was notable for a number of car chases, but the finale was one of the best hair-raising and realistic chase sequences ever filmed. In the final chase sequence, Sam (De Niro) and Deirdre (Natascha McElhone) were in a high-speed, wrong way road racing through the streets of Paris and inside a tunnel under the Seine River, then continuing into heavy freeway traffic. Another notable chase scene involved Sam and Vincent (Jean Reno) in hot pursuit of a car containing a steel briefcase, careening on a twisting road of Cote d’Azur.

About 300 stunt drivers were hired in the film and 80 cars were intentionally wrecked during production. You can sense a real thrill on its chases because the cars being filmed were actually going fast, even up to 120 miles per hour. If Bullitt revolutionized how car chases were seen in movies, the French Connection gave it a never-before-seen reality. The film is often cited as containing one of the best car chase sequences in movie history. Using a dashboard and handheld cameras, this William Friedkin car thriller film created the sense of being right there with Detective Popeye Doyle (Gene Hackman) while he was on the unbelievable, high-speed car chasing scene.

Doyle was on a pursuit of a suspected drug dealer in a hijacked elevated train above him in Brooklyn. During the chase, he half-collided with a car at an intersection, almost hit a woman crossing the street with a stroller, and was side-swept by a delivery truck – all the while honking the car’s horn and switching from his brake to accelerator. The ferocious, highly convincing acting of Hackman made it all the more realistic.

This film featured a highly entertaining, death-defying chase that reportedly had the most car crashes in film history. With the money to save a Catholic orphanage they grew up in, Elwood Blues (Dan Aykroyd) and his brother Jake (John Belushi) sped in their converted Dodge that they call “Bluesmobile,” to escape the squad of police cars following them. While on the process, they crashed through a busy shopping mall that sent shoppers shrieking and fleeing.

During the last hour of the film, the brothers sped 106 miles toward downtown Chicago in the chase – demolition derby style – and ended up plowing their car through a flock of pigeons, a crowd of pedestrians and into the lobby of a municipal building. When they reached their destination, the Bluesmobile completely fell apart after they stepped out of it. For the scene, the filmmakers hired 40 stunt drivers and bought 60 police cars, most of which were destroyed during production.

In this car-chase film, NASCAR wannabe racers Larry Rayder (Peter Fonda) and Deke Sommers (Adam Rourke) rob a supermarket of $150,000 as they plan to use the cash to get into the racing business, and then fled in a 1967 Chevy. Along the way, they pick up a one-night-stand named Mary Coombs (Susan George), and the group goes on an insane chase from the police, trying to out-maneuver police cars and helicopters by driving across an expansive walnut grove. Believing they outsmarted the police, they meet their doom when they crash into a moving freight train, ending the film with an explosive and fiery finale.