The 1950s can be considered as the golden age in many terms like music, fashion, and… cars! This decade was definitely the peak of the automotive industry, and these hot rods certainly made their mark during their time… and beyond. Check out these best budget component speakers for the AM radio of this car.

However, the more expensive and classic the car, the more expensive the maintenance. The owners of iconic cars of the 50s know how challenging and costly it may be to restore a classic vehicle to bring it back on the road. The exact cost of car repair works for 50s autos that have seen some better days depends on many factors, including the level of restoration, the type of breakdown, the cost of parts, and more. Sometimes only the cost of labor may reach $100 per hour for some specialized services.

We have picked up 17 of the most iconic, elegant and revolutionary cars from the 1950s that left their marks in the history of the automobiles. Check out those classic gems here: This 50’s gem was equipped with iconic design elements like waterfall grilles and sweeping sides. In spite of being amazingly expensive in contrast to other models, the Skylark became an iconic car due to its classy looks. It was introduced to pay tribute to Buick’s 50th anniversary. 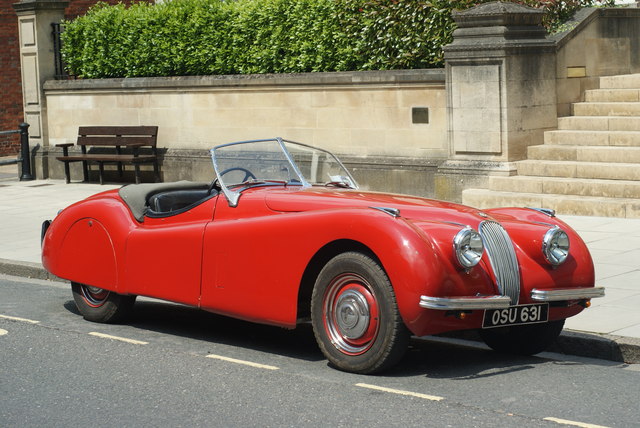 The Jaguar XK120 was originally intended as a limited-edition unit, but high demand spurred the company to roll out more of these cars at the time. Its cool exterior design was the brainchild of no less than the Jaguar co-owner, William Lyons.

Not only the Jaguar XK120 was built to please the eye, but it was made to serve as a powerful car. It had a 3.4-liter, double-overhead-cam inline-six that generated 160 brake horsepower. Car competition had already been fierce in the 1950s. Several manufacturers were competing with each other by producing their own cars that, they claimed, looked more stylish and were more powerful than their rivals. Initially, Plymouth cars used to be cheap and more real and these cars can be sold to Scrap Car Removal Oshawa which is best service for selling your old cars. But with the increasing demand, Plymouth embraced the flashy approach which was trending back then in the 50s. The Fury was introduced that favored style over practicality. Its tailfins and elegant curves made it one of the unique cars of the 1950s.

5. The Mighty Chrysler Imperial of 1950s One of the most powerful automobiles of the 50s was the Chrysler Imperial with a huge Hemi engine. Besides its luxurious looks and amazing height, it was extremely expensive as well. It was the first car to feature disc brakes and circular signal lights embedded in a chrome grille. The Aston Martin DB5 gained international recognition in the 1960s as James Bond’s weapon of choice. But its predecessor, the DB4, was a fabulous car on its own merit. Aston Martin rolled out a more powerful edition of the DB4, the DB4 GT Zagato in 1958. It had a 240 horsepower, 3.7-liter, six-cylinder engine, and disc brakes on all four wheels.  Meanwhile, check out the post to learn more about casino gratis bonus ohne einzahlung.

It is infamously known as James Dean’s “Little Bastard” that contributed to his fatal car crash during an auto race. It is known for its classy and futuristic looks. Touted as Porsche’s first race car, the 550 Spyder featured an extremely light and low body as well as an iconic gray color.

Another variant is also available which is known as “Power Package”. It features an upgraded engine that produced 180hp). This exceptional advancement of Chevrolet Corvette was introduced to compete with Ford’s Thunderbird. This car came with a powerful V8 engine and a sleek design that made it an iconic car of the 50s. The Corvette produced 283 horsepower and could reach the speed of 132 mph. The Mercedes-Benz 300SL never fails to garner instant attention because of one big thing: its gull-wing doors. It was also the fastest car by the time it was released, and also the first car to use the direct injection engine technology that boosted the car’s power by around 25%. Because of these attributes, the 300SL enjoyed high sales. This classic car with futuristic styling became one of the popular cars in the 1950s. It introduced advanced hydraulic suspension and the latest steering wheel style that improved handling and grip. It also highlighted novel technology by introducing a semi-automatic gearbox and disc brakes. If you think of an ultimate 1950’s luxury car, then the Cadillac Eldorado will perfectly fit the bill. It had a long and shiny chrome body, white-wall tires, conical Dagmar bumpers, and pointy tailfins. The Eldorado was one of Cadillac’s most expensive cars during this decade, and over the years the existing units of this legendary automobile still retain their luster. It was named after Henry Ford’s estate, Fair Lane. It replaced the Crestline as Ford’s premier full-size offering. There were six different models launched; all of them attributed the distinctive stainless steel on the sides. For safety purpose, optional padding on the dash was added. Also, an energy-absorbing steering wheel and safety belts were featured for the first time in the Lifeguard Safety Package, which was marked as a significant advancement of the year in the auto industry.  Check out toolsarchive blog for great tips on automotive tools. It is not a car but the best-selling and the longest-running line of trucks in the world that can detect its roots all the way back to the F100. In 1950, the F series was considered to be rough and durable, having the potential of supporting heavy loads. In 1953, two engine configurations were introduced including the 239 CID flathead V8 with 100 horsepower and the 215 CID straight-six with 101 horsepower.

The truck you can see in the picture is the Canadian version of the Ford F-100; they only rebadged it to Mercury M-100. Kaiser Darrin is the first car ever to use fiberglass, beating the Corvette to the punch by its classic features. This Roadster has an easily distinguishable design known as the “Darrin Dip”. At that time, the sales of Kaiser Darrin were low, but still, it was considered the crowning achievement of the industrialist Henry J Kaiser. It came along with some unusual extras like a three-positioned Landau top, a tachometer, and a tinted windshield. Lincoln Continental offered an ultra-luxurious marquee that incorporates all of the elegance of the 1950s. In addition to its simple grace, it featured a stylish egg-crate grille and a long curving hood that boasted the price tag reflective of its luxury If you are a fan of vintage cars especially 1950’s, then you should check out this excellent book “Cars of the Fabulous 50’s: A Decade of High Style and Good Times” – it contains more than 1,600 photos and illustrations of the best cars of that decade.

You may check this helpful blog about cars for more info.

Read next: Iconic Cars of the 60s