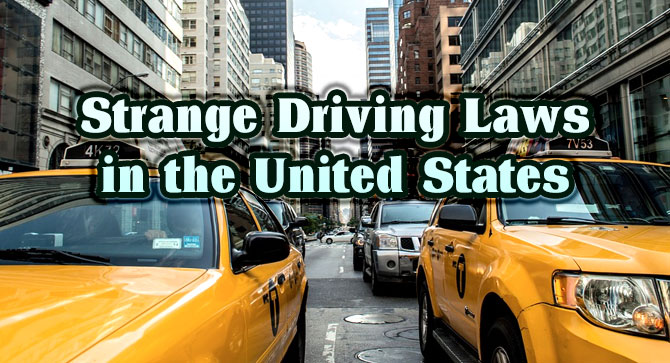 Even in the United States, you may also find driving laws that are simply strange and, at best, dumb. Check out the weird and wacky US driving and traffic laws — enumerated state by state — that you won’t believe are real! You could be a lawbreaker on the road in Alabama if you:

a) drive blindfolded, or
b) drive down the one-way street in the wrong direction

In Alaska, it is illegal to tie your dog on top of your car. The question is: why would someone want to do that anyway?

In Arizona, you are not permitted to drive in reverse; else, it could give you a ticket. One of the weirdest traffic laws in the US is found in Arkansas. If you’re disturbing the peace by blowing your car’s horn in front of a sandwich store at 9 pm, you could get fined. Besides, you won’t be getting a sandwich.

You can find plenty of traffic/driving laws in California that are totally dumb.

In Glendale, don’t you dare jump out of the car that speeds at 65 mph. That’s not only illegal there, it stupid too.

In Eureka, if you’re found sleeping in the road, you could find yourself sleeping in jail!

It is illegal to shoot wild animals — except whales — from a moving vehicle. We ask: how is that possible?

It is illegal to drive a black car in Colorado on a Sunday (although this is a real law, that might not be enforced). Unlike in California, you are prohibited from shooting whales while your car is on the move.

Don’t change clothes inside your car in Delaware or you’ll be in trouble.

Parking an elephant on the main road will still make you pay the parking meter. It sounds like a fantasy, but this is a real, existing law in Florida!

Avoid hitting a pedestrian or you’ll be forced to shell out a $78 fine! If your car is on the move and you use hazard lights, you could be penalized.

Drinking beer on a country parking lot is considered unlawful.

You are not allowed to ride a motorcycle in Idaho Falls if you’re over 88 years old. Changing clothes inside a car — with curtains drawn — is illegal, except when there’s a fire.

It is also illegal to drive in Illinois without a steering wheel!

If you’re a car seller or dealer in Indiana, forget about doing your business on a Sunday.

Throwing your Red Ryder onto the road is considered a crime. If you dare try to screech your tires, you could end up in jail for 30 days.

If your pet doggie molests a vehicle, expect a stiff fine!

Single women are allowed to drive only if a man holds a warning flag in front of their vehicle. In South Berwick, Maine, parking in front of a Dunkin Donuts store is considered illegal (except for police vehicles).

In Rockville, Maryland, swearing inside your vehicle will end you up in legal trouble. Reading a newspaper in the middle of the street is against the law (so reading something else is A-OK, then?)

In Minnesota, crossing state lines wearing a duck in your head could put you into a legal mess.

Honking near horses is considered a crime in Mississippi. Leaving an unattended sheep inside a truck will make you a criminal!

Although Nebraska is one of the flattest states in the country, it nevertheless has a law about driving alongside mountains! Thinking about sitting on a sofa in the middle of the road? Forget doing it in Nevada, which considers it as a legal offense.

Try to smile at a police officer in New Jersey, no matter what happens! It’s because scowling at a cop will put you in serious legal trouble.

Doesn’t it sound scary when you don’t want to ride in a cab yet the driver is dragging you into it? That’s illegal in New Mexico. At least, it sounds logical compared to other state traffic laws on this list. Being naked inside a car is a legal no-no in the village of Sag Harbor, New York.

It is illegal to play in traffic, and also illegal to drive on the sidewalk.

Dropping a penny in automatic parking meters is unlawful, so don’t forget to carry quarters when you drive in North Dakota! Rollerskating alongside cars is against the law in Ohio.

Reading a comic book is fine in Oklahoma, except while driving.

If you leave your car open too long in Oregon, officers will grant you a ticket! Selling vehicles on Sunday is prohibited in Pennsylvania. It is almost similar to the Indiana law mentioned earlier.

If you fail to send an audible signal when you pass another vehicle, you could be in for legal woes.

Carrying garbage inside your car is a no-no in South Carolina. This is like one of the California laws — shooting animals from your car is illegal unless the animal is a whale.

In Texas, you are required by law to have windshield wipers, whether your vehicle has a windshield or not.

Throwing something that goes up in flames while you’re in a moving vehicle is a criminal offense in Utah. If you plan to put up a billboard, don’t do it in Vermont or face charges.

If you are drunk and not doing the driving and the other person who does the driving is drunk as well, both of you may be awarded DUI’s.

It is illegal to ride an ugly horse in Washington. Aaaaww… Take camping on the fields or on the mountains, but not on the public highway. Doing so will cost you a $10 fine.

Even just forgetting to close a gate behind your vehicle, that is still considered as a serious offense in Wyoming.